While on my adventure to Auburn, we stopped by Little Italy Pizza. It’s an affordable little pizza place nestled on a small, but bustling street. The inside was larger than expected from the outside and the moment we stepped inside I was ravenous. It smells fantastic and the various pizzas they were working on behind the counter did nothing to help my appetite.

They had high ceilings and relaxed lighting. The cashier was exceptionally personable and patient with me trying to make up my mind on what to try. I’m afraid my choice wasn’t too exciting because I’m rather boring in my pizza preference. I chose a bacon and pepperoni calzone.

The calzone itself wasn’t very… presentable, and nor was it what I expected. But that aside it tasted great. It was stuffed with ricotta, mozzarella and my choices of meat. I wasted no time digging in.

While the presentation is obviously lacking, it makes up for that in taste. It was fresh out of the oven and the crispness proved it, it had a very pleasant crunch. To my surprise, given what it was, it wasn’t overly greasy and they used plenty of cheese. The provided marinara sauce, which I didn’t even need. They didn’t drown me in pepperoni, I guess they know the most important part of the calzone is the cheese, so for that, I’m grateful. (get it?)

All in all, Little Italy Pizza in Auburn was a good experience. The food was tasty and affordable, and the workers were all incredibly friendly. I certainly recommend this place if you’re from out of the area and trying to eat on a budget!

While the pizza was good, it wasn’t remarkable and was slightly above average. Not too greasy which is a plus!

I’ve been wanting to come back here since we found it a few weeks ago, before our trip to Homewood. It has a really mellow lighting that is calming and tranquil when paired with the comfortable seating options it really makes you feel right home. Mama Mocha’s has a wide open floor plan with a somewhat disheveled charm that feels altogether welcoming. And though they have a menu with so many things, it’s not intimidating in the least because the baristas are so knowledgeable and patient.

This evening when we went, it was busy. Like really busy. It’s near Finals time and there were college students lounged out everywhere (some with blankets!). In order to respect them, I didn’t take pictures of my own but took some from google reviews that have been posted. 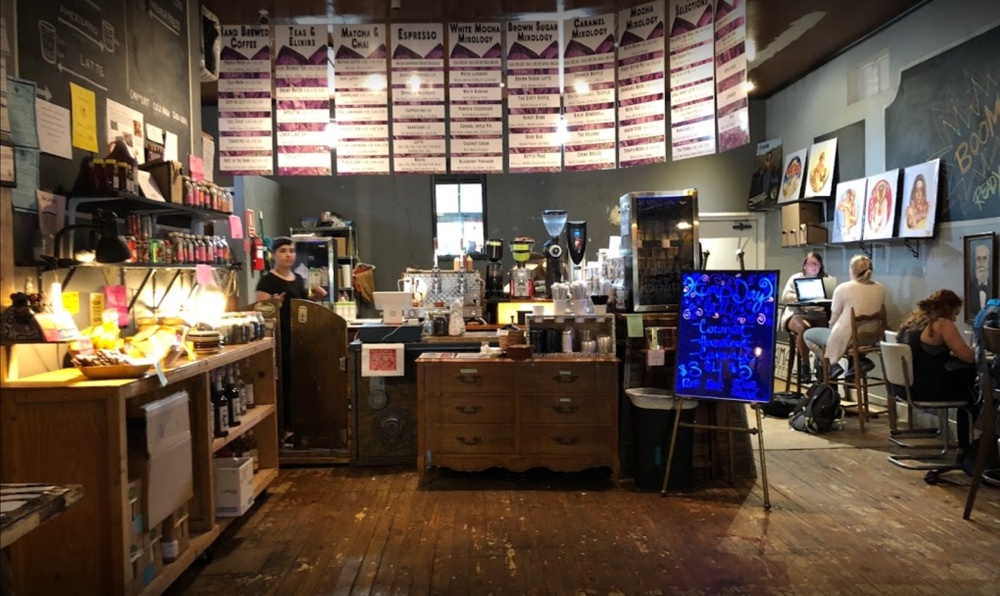 The view when you walk up to the counter! Look at all of those choices! 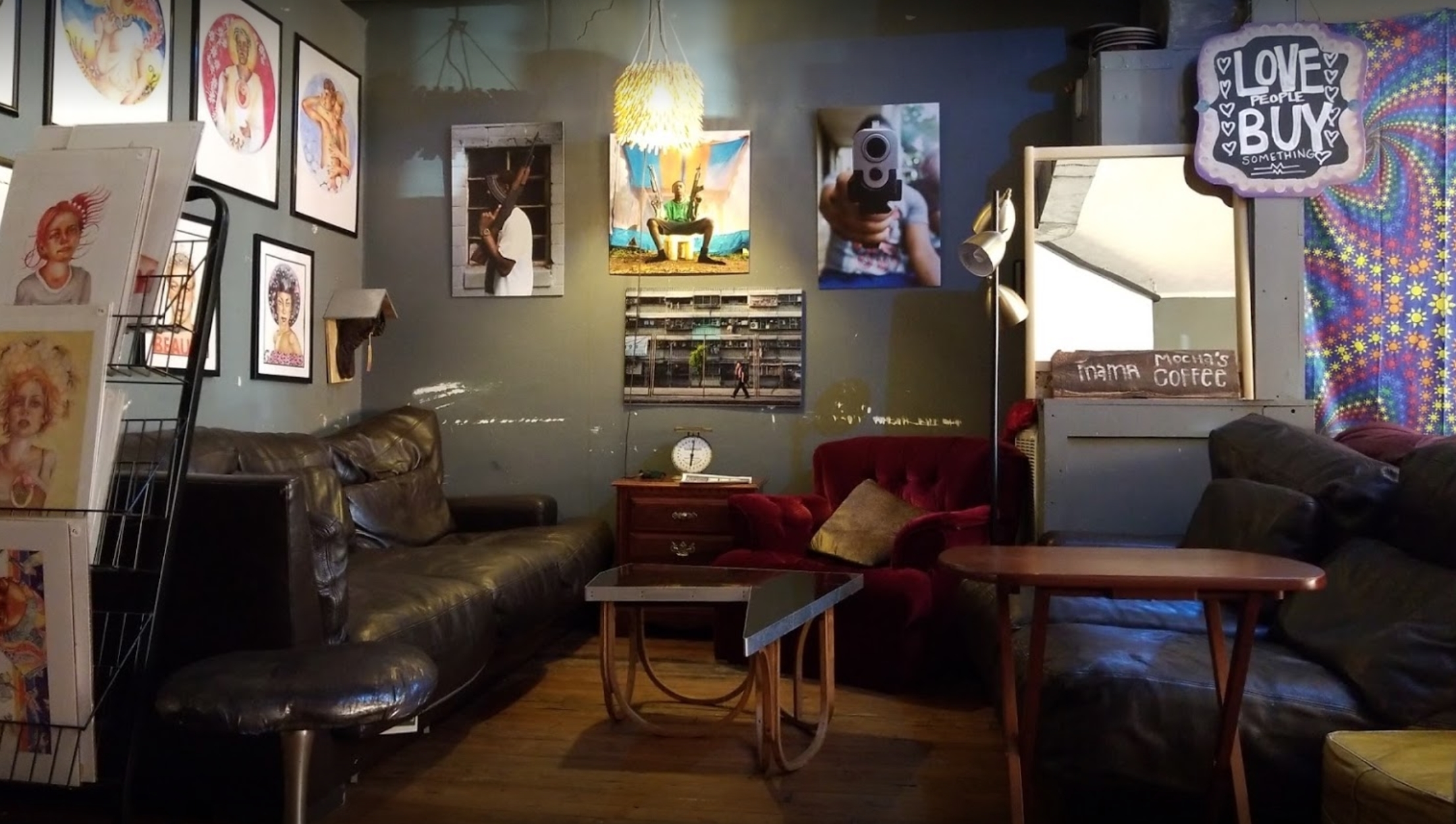 My favorite corner of the seating area- that couch is insanely plush!

When I went to place my order, I was tossed up between the White Russian (toffee and white mocha) or the Drunken Waffle (Maple and Heavy Caramel), I asked the barista what she liked better and ended up opting with her advice; the White Russian. It came out the moment I was done paying, and the service was phenomenal.

The drink itself smells a little like candy, which is to say it’s very sweet smelling. Luckily though, it’s not quite as sweet as it smells with a pleasant bite from the espresso acting as a precursor to the somewhat forceful toffee flavor. It reaches a lovely contrast as the flavor disburses. The espresso is certainly potent because I’m not going to lie, I feel raring to go!

If you don’t like toffee, this drink is definitely not for you because the toffee is definitely noticeable. If you enjoy toffee or toffee flavors, then I urge you to give this drink a try. Full disclosure, this isn’t the first time I’ve tried this, and it certainly won’t be the last.

for the artsy layout and the cloth covering that could be seen as an interesting backdrop to photos, I give Mama Mocha’s a 3.5 out of 5.

Welcome to another review of a city event! This one is on Auburn’s City Fest, and right away I got some serious Woodstock Vibes from the people huddled under the shade of the many trees while on their picnic blankets. My other half would have loved it, had he accompanied me but having run all weekend last week, he opted to stay home.

I met up with Miss Jeans and her husband and we wandered around the many, many booths for a while. Plenty of art and unique treats to be seen. Including coffee candy that was Phenomenal and ties into my theme. I tried the french vanilla and bought a Pop. The inside of the candy has the bean in it. I’m really excited to eat it later. It was a hard choice on what flavor to try, because they had so many different ones. The same booth also had Coffee Butter Lip Balm and… GUYS. It smells so good and it feels so rich. If I pucker up, I smell coffee. It’s amazing.

Aside from the coffee stuff, they had some crinkle fries that were pretty over-priced that we wanted, but couldn’t justify spending 11 bucks on it. What I could justify was some red-velvet keylime cake. I tasted the velvet portion and it was divine. Unfortunately I did drop it, and while one of the MANY dogs didn’t get to it, it did get a little beat up. It still tastes FANTASTIC.

I really wanted to try some of the food, but unfortunately, I’m on a budget so I had to make do with cake and lip balm. I did really want some italian ice or some pork skins, which had some flavors that you don’t see in stores like sour cream and onion.

The high-light of my day at the event was the dogs. You couldn’t take two steps without running into a dog. Pit Bulls, Huskies, Labs, and Corgies were everywhere. My favorite dog was one wearing sunglasses that I was invited to take a photo of. He posed for me and just looks so relaxed that I wanted to take him home with me.

There were so many stalls of different crafts and foods, and the entire park smelled absolutely delicious that I was starving within about 45 minutes. We decided to hit the road before it got close to closing so that we wouldn’t have to fight to escape. I took one lingering look back into the park before we left to carry on with our day.

From this point on, since this event had just so many dogs, I’ll be using puppies for my rating system.